Blogs Well now that it's over, I can talk about it. 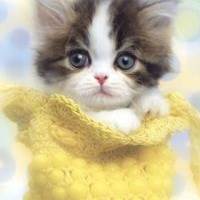 Well now that it's over, I can talk about it.

Dixie was so sick.
Posted by Eileen
Tags:
tags1 tags2

About two weeks ago my little cat Dixie got sick. It was on a Thursday that she had a case of diarrhea and she vomited in the bathroom. She seemed just fine though still playing and running around inside and out in the yard. Every morning she jumps on my bed to wake me up and then she jumps in my wheelchair to get a ride into the bathroom where I put her food dish on a little table.This Friday morning she did not jump up on my bed to wake me, she didn't get on my chair, she was under my bed. When I got her food dish out, she didn't come eat, she just went to the door to go outside.I didn't see her face or her eyes, I just let her go out. She jumped off the porch and dropped on the ground laying on her side. I was on my porch looking down at her and calling her. She barely was able to lift up her head to look at me and only then could I see her eyes. They were just half open and runny.It was very hot out their already which worried me because it was still early in the morning and we have been having extremely hot weather over the past two days.I tried to call her back up to the porch so I could get her back into the house.She would not move!It seems like I'm always home alone when these things happen. Trying to think about who I could call for help, when Dixie finally got up but then followed my other cat Little Girl down the path that went down a steep hill away from our property I was now beside myself thinking all kinds of bad things happening to her.

1. she would be too weak to get back up the hill.

2. She had no food or water in her and she will get dehydrated out in the heat all day.

3. She has never been out after six o'clock and she'll get frightened.

I was now in a fearful state of mind and hated my inability to just get up out of this   @%#!!%^&^%#*!!%@  wheelchair and go get her !!!!!!It was now about two in the afternoon and I finally called my granddaughter Chelsea, crying I told her my situation and asked her if she could buy me a bottle of Kayo syrup and come to the house. She did. She tried to calm me down telling me Dixie will come home soon, that cats do unbelievable things and that her cat came home even though someone had shot him with a bee bee gun and he had them in his hind leg and limped home and it all turned out fine after a trip to the vets. You know, that did help me.I had brown rice, ice cubes, and a can of chicken broth. With that and the Kayo syrup, I was able to get my little pup Pookie back to health so I knew if I could just get Dixie home I would be able to help her. It was now eight thirty in the evening and Dixie was never out this late! I could not eat or drink anything. I could not stop looking out the door at my porch for her. And I could not stop crying, and yes, I kept praying to God about my cat.FINALLY !!!  she was laying on my porch, but she would not come. I tried cat food, fresh fish cat food, and her evening treats and nothing helped. It was sooo late by now and I was so tired. I was happy she was on the porch and not dead from the heat at the bottom of the hill, but my white cat was not home yet which is not unusual for her and I did not want Dixie leaving my porch and wandering off again.I finally did get her in by opening up the large window that is off one end of the porch and goes into my living room. She came in that window. Now.....I can go to bed.I know I'm going into a lot of detail about the first day of my cats illness but I want you to go through the emotions one has when in a position of helplessness and housebound and wheelchair-bound.

Saturday- Dixie is real sick and now she is sneezing uncontrollably, her eyes are half shut and she's warm. I try to get some water and food in her but she won't even try. I put some syrup on my finger and she did lick it off. I gave her some warm chicken broth and she drank a little. I then put some soft fish cat food in the broth and she drank and ate a little. No vets were open on the weekend. I called one on Monday morning and she would not be able to take Dixie till Wednesday. I called another and she could get her in between others around 1:00 P.M. and 2:00. Thankfully my daughter would be home from her job at one.At last !!! my cat's at the vets.She has  upper respiratory disease. and gastrointestinal.She got lots of medication, lots of chicken broth, lots of rest and love. I kept her in for one week.Finally after a week of treatment she looked great, running around the house getting into the usual trouble and begging to go outside. I really did not want to let her out but by Monday morning a full week later, when I saw her standing on her hind legs, both paws on the window of my porch door, looking out and watching the other cats in the yard, Little Girl and my daughters cat, I could take it no more....I let her out.

She ran around the yard, ate grass, and chased a butterfly, I knew my Dixie was back to her self and healthy and happy and so was I !